The previous week had been grey and miserable. The wind kept shifting and made rounding Castle Roads a choppy passage. For the most part, we were constantly working with the latent threat of a storm.

On the morning of the 28th, however, the sun was brilliant, the sky cloudless, and the water in Castle Harbour clearer than I had ever seen it.

In the bright sunlight, the water in Castle Harbour is crystalline.

It was the first chance for our new team members to see the wreck of the Warwick; for all of us it was the first chance to see the shipwreck from the surface. You could make out every detail – eroded frames emerging from the soft grey sediment, twisted concretions of cannon balls and iron fasteners, and the sweeping lines of ceiling planks barely revealed beneath mounds of sand and coral. 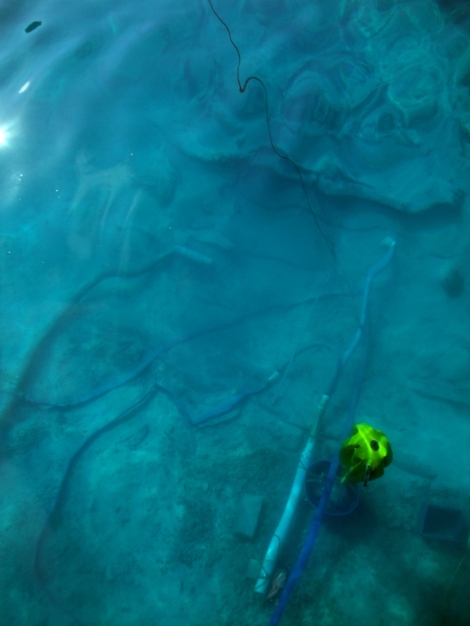 The site of the wreck, as seen from the surface. Timbers, dredges, hoses and a lift bag are all visible form the barge.

I kept repeating “I have never seen it this clear!” Partly this was because I was surprised, but mostly I didn’t want our new recruits to get the wrong idea about working on Warwick: once work starts, you seldom see anything. Silt plumes reduce visibility to mere inches, forcing you to work carefully and close. Castle Harbour is no diving paradise; although we are right against the reefs, the whole harbour is blanketed with a layer of fine sediment that goes into suspension at the slightest disturbance. This clarity was unreal.

A cloud of silt cascades off the wreck as Piotr dredges. Fish dart about his hands, eagerly devouring nutrients exposed in the churning sediment.

Photographers are always first in. Although light is usually better in the afternoon, morning is the only chance we have to shoot without suspended particles completely washing out our images. Even at their best, conditions are not ideal for photographs. 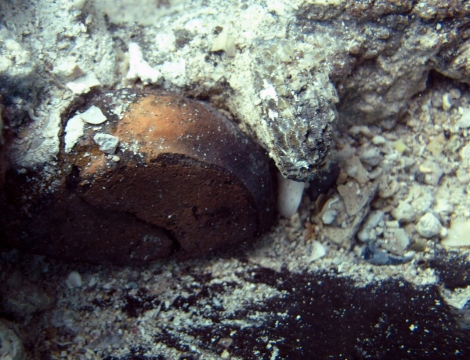 A small ceramic fragment alongside an iron spike.

When she is taking photographs, Maureen prefers fins because they help her control her trim as she cruises from shot to shot. Most often I go in bare feet. I like to get down right over the wreck to take close-ups; I gently use my toes to help steady myself in the water column. This can backfire, as making any sudden movement will send up a plume of silt. The benefit is that I can be patient and focus on the picture instead of my buoyancy.

One response to “A Moment of Clarity”

In 1619, a hurricane sank the English galleon Warwick in Castle Harbour, Bermuda. Join our international team of scientists as they undertake the full scale archaeological excavation of the wreck. 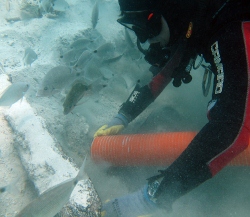 During June and July 2012 our team will blog from the field. Follow the day to day progress, ask questions and see discoveries as they happen! 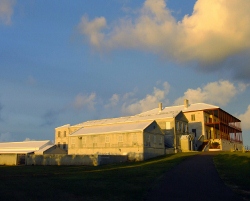 For an extraordinary dive into the island's past, visit National Museum of Bermuda. Home to 500 years of history, the museum is located in the citadel keep that towers over the historic dockyard district. Whether you are interested in seeing relics raised from shipwrecks, learning more about the forts that once protected the island or want to explore early colonial history, there is something for everyone.

If you are interested in diving on some of Bermuda's most incredible wrecks, try the Tucker's Point Dive and Water Sports Center. Over the centuries, hundreds of vessels have fallen victim to Bermuda's beautiful reefs. Diving on them is an unforgettable experience - and we go out any chance we get! 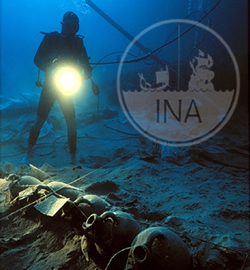 Explore other shipwreck excavations around the world with the Institute of Nautical Archaeology! We are working in Bermuda, Brazil, Canada, Italy, Japan, Jamaica, Spain, Sri Lanka, Tobago, Turkey, Ukraine, and United States - so check out our other blogs! 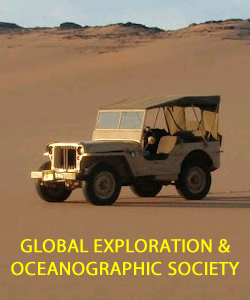 The GEOS Foundation supports geographical research and scientific expeditions around the world. Follow reports from the field on the GEOS blog.